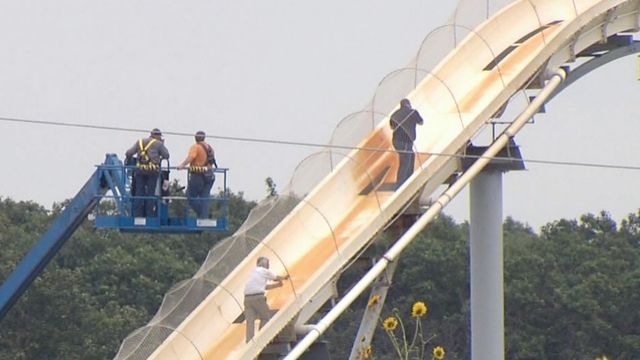 SMS
The Kansas Waterslide That Killed A 10-Year-Old Boy Will Be Demolished
By Briana Koeneman
By Briana Koeneman
November 23, 2016
The Verrückt waterslide will be destroyed once the criminal investigation into Caleb Schwab's death is complete.
SHOW TRANSCRIPT

The Verrückt waterslide at the Schlitterbahn Kansas City Waterpark has been closed since August, when a 10-year-old boy died while riding it.

And on Tuesday, the waterpark's parent company announced it has decided to demolish the slide — which is the world's tallest — once an investigation into the boy's death is complete.

A spokesperson for Schlitterbahn Waterparks and Resorts said in a statement, "In our opinion, it is the only proper course of action following this tragedy." Another attraction will reportedly replace Verrückt at some point in the future.

According to police, 10-year-old Caleb Schwab died Aug. 7 after sustaining a neck injury on the 168-foot-tall slide. Reports that the boy was decapitated have not been confirmed by authorities.

More than three months later, the Kansas City, Kansas, Police Department told Newsy's partners at KSHB that a criminal investigation into the incident is still ongoing but charges are unlikely.