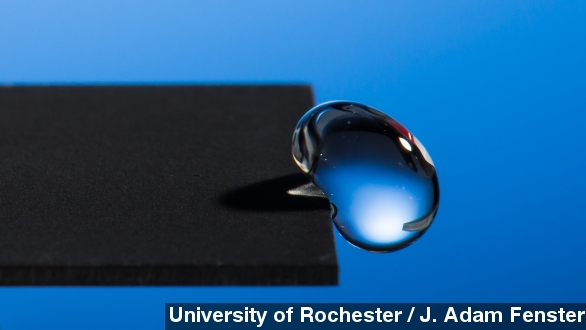 Water likes metal: It sticks to the surface and isn't easy to shake off because of how the two interact on a molecular level.

As detailed in the Journal of Applied Physics, scientists achieved this by using extremely powerful lasers, fired in extremely short bursts, to create the pattern, mimicking hydrophobic surfaces in nature.

Some plants, like this kale, have hydrophobic leaves. Microscopic structures on the leaves, as well as waxy coatings, help water slide off, which cleans the leaves in the rain. (Video via Southwest Center for Microsystems Education)

Other efforts to create hydrophobic surface patterns, like this one the Slow Mo Guys documented, involve making surfaces that create tiny air pockets which, in turn, keep water from sticking. (Video via The Slow Mo Guys)

But for the University of Rochester scientists, the super-hydrophobic effect comes from how the metals react to carbon dioxide in the air, which creates an accumulation of carbon and carbon compounds on the surface. (Video via Journal of Applied Physics / Vorobyev & Guo)

Because the resulting metals are so hydrophobic, they can not only avoid rusting, but they can also self-clean. When water bounces off the metal, it can take dirt, dust and other materials with it.

The Bill and Melinda Gates Foundation partly funded the research in the hope the technology can be used in developing countries to better capture rainwater and create self-cleaning latrines. (Video via PBS)

The scientists say from here they will focus on speeding up the process — it can take an hour to pattern a metal surface of just one square inch.

This video includes an image from Chad Cooper / CC BY 2.0.