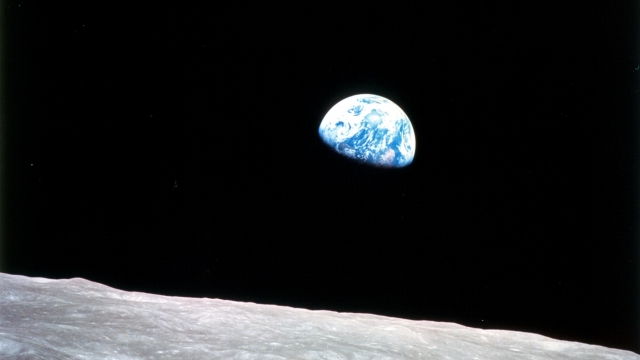 SMS
Listen To Astronauts Talk Earth, From Space
By Evan Thomas
By Evan Thomas
April 20, 2016
Astronauts who spend time looking at Earth from orbit or beyond say it changes their perspectives on their lives, the environment and civilization.
SHOW TRANSCRIPT

There's something about looking at Earth from space. There's no other place like it, as far as we know, and for most of us, the view from the ground is all we ever experience.

Astronaut Frank Borman: "Oh my God! Look at that picture over there. Here's the Earth coming up. Wow, is that pretty."

Astronaut William Anders: "Hey, don't take that; it's not scheduled."

Anders: "Hand me that roll of color, quick, will you?"

But the experience can change people's entire outlook on life, civilization and the environment. Talk to an astronaut, and they'll probably tell you about something called the Overview Effect.

"The thing I remember most is the view of planet Earth from a great distance. Tiny, very shiny, blue and white. Bright, beautiful, serene and fragile," Michael Collins said.

"I'd seen aurora from the surface of the Earth. But to be amongst them? To actually directly be part of the interaction between the sun and the atmosphere and the magnetic field, all right there visually, like a prism or a rainbow or something — that was a real reality check," Chris Hadfield said.

"When the sun comes up, it comes up so fast and furious. And the colors change. It's miraculous. You have this sun beating down on you, greater than any sunrise you've ever experienced on Earth," said Tracy Caldwell Dyson.

"You notice how the atmosphere looks, how fragile it looks. It makes you more of an environmentalist after spending so much time looking down at our planet," Scott Kelly said.

"When you pull back to this big picture perspective, a lot of the differences we have, a lot of the problems we have kind of blur into insignificance. It fills you with this refusal to accept the status quo on our planet," Ron Garan said.

This video includes clips from the Seth MacFarlane Collection of the Carl Sagan and Ann Druyan Archive, NASA, Veritasium, careergirls and ABC and images from NASA.