Watch These Firefighters Rescue A Cat Trapped Inside A Car's Fender 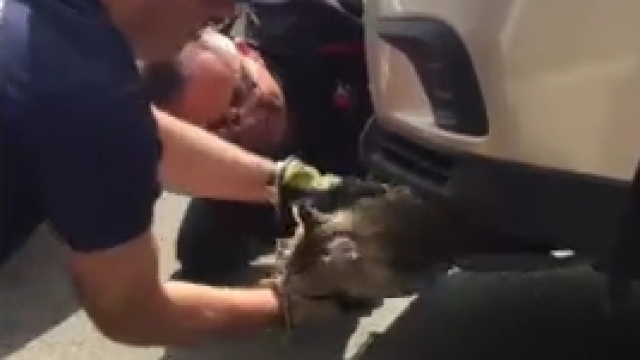 SMS
Watch These Firefighters Rescue A Cat Trapped Inside A Car's Fender
By Katherine Biek
By Katherine Biek
April 14, 2016
A man didn't realize a cat was trapped inside his car's fender until he returned home from a trip to Mexico.
SHOW TRANSCRIPT

A California man didn't realize a cat was trapped in the front fender of his car.

He'd been traveling from Mexico back to his home in Oceanside and didn't hear the feline meowing until he was home.

Oceanside is about a 54-mile drive from the Mexico border, according to KNSD, but the man doesn't know when the cat became trapped during the trip.

The Oceanside Fire Department was called in to rescue the cat who looked a little dirty but no worse for wear.

The feline has since been taken to the local animal shelter.

This video includes clips from the Oceanside Fire Department and images from Facebook.