Watch President Obama Get His Face Scanned For Science 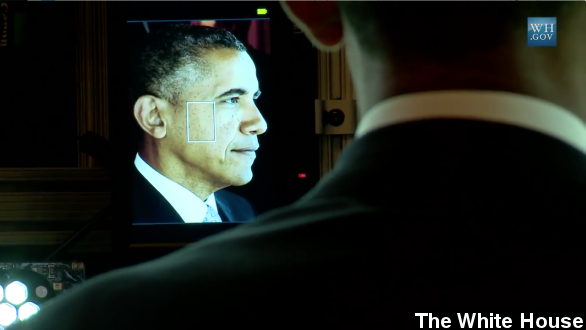 "3-D printing has the potential to revolutionize the way we make almost everything," said President Obama at the 2013 State of the Union address.

That was President Obama during the 2013 State of the Union address. Now, more than a year later, 3-D printing is even revolutionizing the way we make presidential busts.

​"He will be surrounded in front by 50 custom-built LED lights, eight high-resolution sports photography cameras and an additional six wider-angle cameras. In about one second, as he holds his presidential pose, he will be illuminated by 10 different lighting conditions," explained Paul Debevec during the photo shoot.

A team of 3D imaging specialists from the Smithsonian Institution and University of Southern California captured 80 photos and millions of data points to craft a 3-D model of our 44th president.

The Smithsonian team says it got its inspiration right out of the history books. Way back in 1860 and again in 1865, President Lincoln's likeness was captured using plaster paste applied to his face. The team has since scanned these so-called life masks, and are now available to view online.

The team noted it probably took about 15 minutes for the plaster paste to dry on President Lincoln's face, all while he breathed through straws placed in his nostrils. President Obama, on the other hand, sat comfortably for about seven minutes while the team captured the data they needed.

Eight minutes' difference in more than 150 years — not bad, science, not bad.

In a blog post revealing the behind-the-scenes video, The White House explained this is all part of the Administration's efforts to encourage engineering and innovation in education and manufacturing.

It was at this event where President Obama's 3D-printed bust was first revealed, but we didn't get an inside look at the process until today.
The portraits are now on display at the Smithsonian Institution Building and will be there until the end of the month.

The Institution notes President Barack Obama is one of three presidents with an actual model of his face. Both George Washington and Abraham Lincoln have a "life-mask" courtesy of that antiquated plaster paste method.