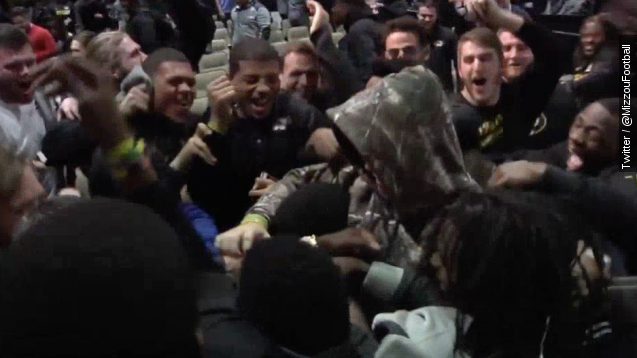 Another big-time college football coaching search ended Thursday night, and we're not sure any other school's coach is going to get a reaction like this. (Video via Twitter / @MizzouFootball)

Though other names were tossed around when Missouri's search for a head coach began, Barry Odom quickly emerged as the players' choice for the job. And the celebration was understandable. (Video via Mizzou Network)

This is only the latest time Mizzou's football team made national headlines this season, ironically none of them for the team's play on the field.

In early November, the team announced it was on strike in protest of the university's mishandling of racial issues and a hunger strike on campus, one of the major developments that eventually helped lead to Missouri's president and chancellor stepping down.

Only a week later, head coach Gary Pinkel announced he was stepping down after a cancer diagnosis. (Video via Yahoo)

A linebacker for the Tigers in his college days, Odom has been involved at Missouri football in some capacity for 14 years. He says he's "honored" to be chosen and "can't wait to get started." (Video via ESPN)

Apparently his players can't, either.