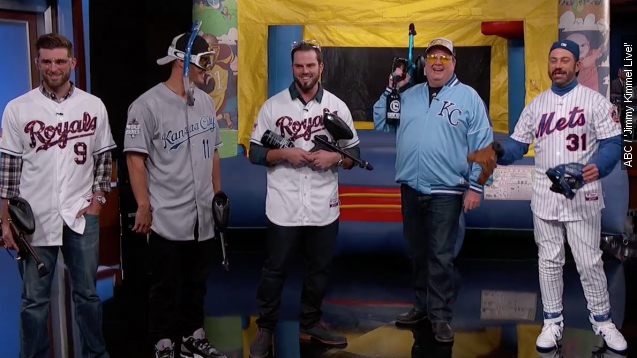 There's a pretty standard list of things you do after you win the World Series. You waste a bunch of champagne, you basically shut down a major city for your massive victory parade, and you pelt Jimmy Kimmel with paintballs.

"Shouldn't you guys be on some kind of white trash vacation right now?" Jimmy Kimmel asked.

Apparently, Jimmy made a bet with "Modern Family" star Eric Stonestreet that whoever's team won the World Series got to shoot the other one with a paintball gun for 30 seconds.

Well, Eric happens to be a Kansas City native, and he invited Mike Moustakas, Jeremy Guthrie and Drew Butera to come along. And it looks like fun was had by all, except for Jimmy, of course.

Guillermo and Seth Rogen hopped in as well, because who wouldn't want a chance to shoot a helpless Jimmy Kimmel with paintballs?