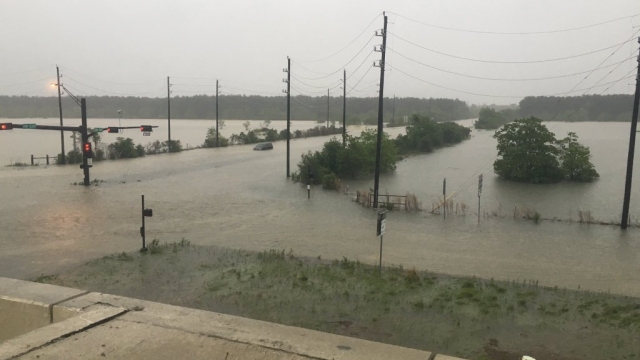 SMS
WATCH: Houston Reporter Rescues Motorist Stranded In Flood Waters
By Briana Koeneman
By Briana Koeneman
April 18, 2016
KTRK's Steve Campion was about to broadcast live from a flooded bridge in Houston when he saw the man drive straight into the high water.
SHOW TRANSCRIPT

A reporter covering the historic flooding in Houston is being credited with saving a man's life as his vehicle was almost completely swallowed by the high waters Monday.

"Thank you," the man replied.

KTRK reporter Steve Campion was just about to broadcast live from a flooded bridge in the city when he saw the motorist, later identified as Andy, drive straight into the water.

Andy was able to open the driver's side door as the vehicle became almost completely submerged. Thankfully, Campion was able to convince the man to leave the car and swim to safety.

This dramatic save was just one of many rescues that took place across Houston as heavy rainfall continued to pummel the area.

Meteorologists say as much as 10 inches of rainfall poured over the city in just six hours early Monday, triggering extremely dangerous flash flooding.

The situation is being called even worse than the catastrophic flooding that plagued the area last May.

And it may not be over just yet. Heavy rain and thunderstorms remain a threat in southern Texas through Monday night with damaging winds, hail and isolated tornadoes possible.