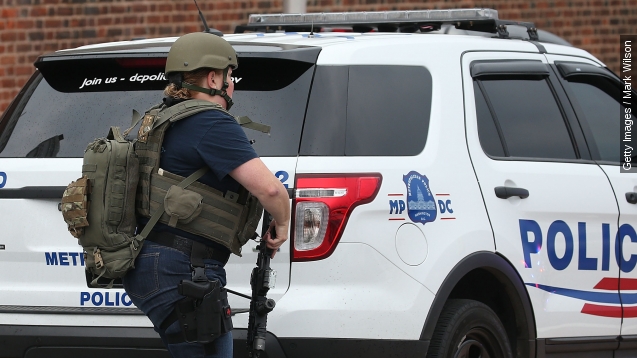 Washington Navy Yard is now all clear after police responded to reports of an active shooter on the campus.

No arrests have been made and no injuries were reported. Early reports indicated two armed men entered the building.

"A massive presence and the people, as you said, coming in to work not going into their offices. They're staying on the corner trying to figure out what is going on," WJLA reports.

Reports came in around 7:30 a.m. local time of an active shooter in the area. Multiple agencies arrived on scene as authorities worked to clear the building. Multiple witnesses inside the building told outlets they didn't hear any gunshots. (Video WRC-TV)

The Navy confirmed a lockdown at the Navy Yard but did not release information on a potential active shooter.

This is the same location where, in 2013, shooter Aaron Alexis fatally shot 12 people, injuring several others. (Video via FBI)

This video includes images from Getty Images and Tim Evanson / CC BY SA 2.0.