Was This High School Football Player Flagged For Praying? 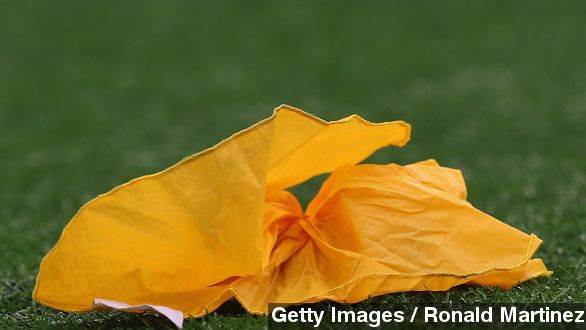 SMS
Was This High School Football Player Flagged For Praying?
By Matt Moreno
By Matt Moreno
November 6, 2014
Fort Myers tight end Sam Turner says he was praying after scoring a touchdown, but it earned him a 15-yard penalty for unsportsmanlike conduct.
SHOW TRANSCRIPT

Celebrations after scoring a touchdown are nothing new in the game of football, but league officials on every level warn, just don't get excessive with it.

And it's the definition of what makes for an "excessive celebration" that has people upset in southern Florida. (Video via Fort Myers News-Press)

As you saw, that celebration lasted just a few seconds, but it earned Fort Myers senior TE Sam Turner a penalty.

And Turner isn't happy about the 15-yard penalty. He says he was praying.

Turner also says he was honoring his former teammate Jo Jo Brunson, who was killed in a drive-by shooting last year.

The Florida High School Athletic Association and the South Gulf Football Officials Association are standing by the referee's call, though.

According to the National Federation of State High School Associations and highlighted by the Fort Myers News-Press, "any delayed, excessive or prolonged act by which a player attempts to focus attention upon himself" will result in an unsportsmanlike conduct penalty. A spokesperson for FHSAA called the ref's flag a "judgement call."

Even Turner's coach said he could see both sides and supported both his player and the refs. According to WJXX, he said: "It comes down to a ref's discretion. To them, they try to follow the letter of the rules. You accept both sides."

In the NFL, a similar situation occurred earlier this year when Kansas City Chiefs safety Husain Abdullah ran back an interception for a touchdown and then dropped to one knee in prayer. Abdullah was flagged for that play too, although after the game the NFL said the official shouldn't have penalized him.

Although Turner says he was unhappy about the penalty at the time, he's at least understanding about it and credits his teammates for picking him back up. That was Turner's first touchdown of the season.