Was The Hajj Stampede 'Inevitable'? 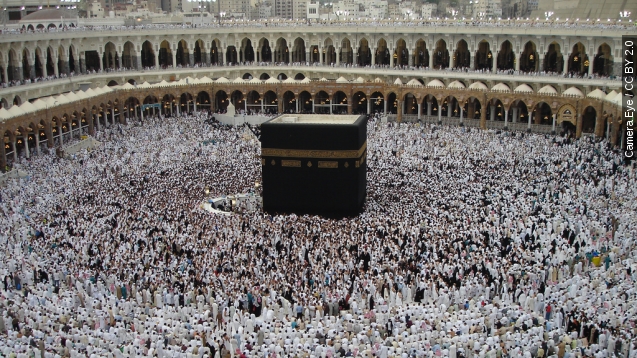 In the wake of the deadly Hajj stampede that has claimed hundreds of lives so far, analysts and world leaders have attempted to figure out how and why such an event took place.

"The accident was caused by overcrowding and also by some of the pilgrims not following the movement instructions of the security in the Hajj ministry," Khalid Al-Falih told reporters.

"Many people still think they need to push and shove to be the first there, to be as close as possible to the pillar, if not in the first row," BBC's Youssef Taha said.

Mismanagement, miscommunication and misbehavior are just some of the reasons people are citing as the cause of the tragedy. Then there was this peculiar message to Saudi Arabia's interior minister from the grand mufti: "As for the things that humans cannot control, you are not blamed for them. Fate and destiny are inevitable." (Video via Al Arabiya)

So, was the stampede just destined to happen? It is, at least, a little disconcerting Saudi Arabia has spent billions of dollars over the years helping to make the Hajj experience more secure in some areas only to have the stampede happen in another area. (Video via BBC)

The confluence of millions of people crowded into an intersection in Mina led to the tragedy, and it's one that's happened before. In 1990, more than 1,400 pilgrims died in a stampede in an overcrowded tunnel — making Thursday's incident only the second worst in recent history. (Video via Saudi TV)

And deadly incidents during holy events aren't unique to the Hajj. A Slate article from 2014 titled "The Shortest Route to God" compares the trek to Mecca to the Kumbh Mela, a Hindu religious festival. The latter is much larger and has also seen its share of tragic events — including stampedes. (Video via National Geographic)

A writer for The Economist says, "it is almost a commonplace that religious wanderings and mortality have always been interconnected." But the writer later adds this tidbit from a British Muslim activist: "that does not exonerate earthly authorities from their responsibility to make religious travel as safe as humanly possible" — which is exactly what Saudi Arabia is trying to do.

Saudi King Salman has ordered an official safety review so that future pilgrims can carry out their rituals comfortably.