Why Was The Bomb Attack On NAACP Office Underreported? 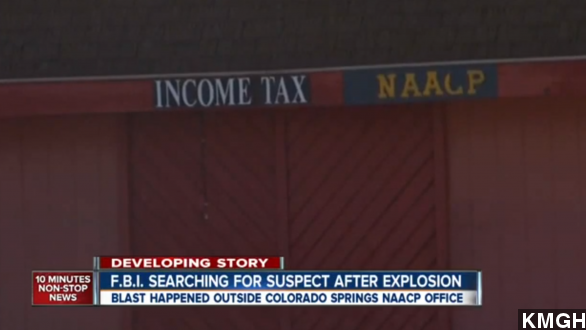 The FBI is on the hunt for a suspect after an improvised explosive device went off outside an NAACP office building in Colorado Springs on Tuesday morning. The explosion shook the building, but it didn't hurt anyone, and authorities are seeking a person of interest in the case. (Video via KMGH)

An IED going off in an American city seems newsworthy enough, but compound that with the fact that it was targeting a group like the NAACP, after months of racial tension, and it seems like a story that would draw a lot of attention.

On Wednesday, the story made it briefly on NBC's "Today" show and was mentioned in passing on CNN during a discussion of tension between protesters and police, but beyond that coverage has been limited. (Video via NBC, CNN)

And that lack of coverage has drawn criticism from the Southern Poverty Law Center, which posted it was "frustrated by the lack of attention," as well as celebrities such as Questlove and Rashida Jones, who asked media outlets to "CARE MORE ABOUT THIS, it's barely getting coverage."

So many people were posting about, it in fact, that the hashtag, "NAACPBombing" was trending on Twitter Wednesday afternoon.

It's hard to say why exactly the story flew under the radar, but it's interesting to note that the NAACP did get a good amount of press attention for other reasons Wednesday.

The NAACP's decision to ask a judge in Missouri to convene a new grand jury over the death of Michael Brown did get time on the major networks. (Video via Fox News)

Bomb attacks on civil rights activists weren't uncommon during the height of the movement in the '60s, with the worst attack killing four children at a church in Birmingham, Alabama, in 1964. (Video via The Smithsonian)

In the Colorado Springs bombing, the FBI has only a vague description of a person of interest — agents are looking for a balding man in his 40s driving a dirty white pickup truck.