Was The Biggest Dinosaur In History Just Discovered? 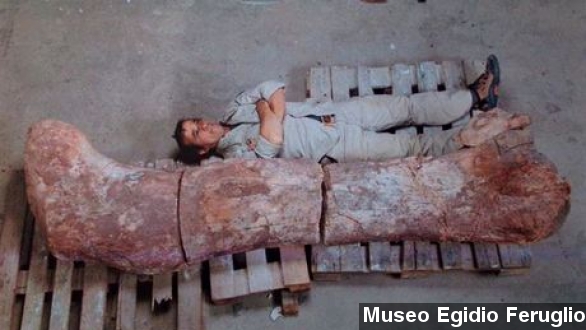 SMS
Was The Biggest Dinosaur In History Just Discovered?
By Jasmine Bailey
By Jasmine Bailey
May 17, 2014
Paleontologists in Argentina believe they've discovered the remains of the largest dinosaur to ever walk the earth.
SHOW TRANSCRIPT

Forget what you think you know about the enormity of the animals that walked the Earth during the dinosaur era. Paleontologists in southern Argentina announced Friday they may have just discovered the biggest dinosaur fossil to date.

Whoa, and that's just the thigh bone. The dino is believed to have measured in at 130 feet long and weighed about 80 tons. (Via ABC)

So for some perspective, that's the weight of of about 14 adult elephants — 14. (Via Wikimedia Commons / Yathin S Krishnappa)

Also, it was about as tall as a seven-story building. (Via Wikimedia Commons / Walla2chick)

"The bones of seven of these creatures were discovered among the plains of Patagonia... These titanic creatures live 100 million yers ago. A time when giants walk the Earth." (Via BBC)

The Daily Mirror notes the new discovery even dwarfs the Argentinosaurus — which was previously believed to be the largest dinosaur.

Time explains, "Scientists believe it is a previously undiscovered species of titanosaur — a herbivore... About 150 bones have been found 'in remarkable condition.'"

So being the big man on campus would seemingly keep away predators, but one of the lead scientists on the find told CBC that probably wasn't the case.

"It's very interesting because some of the largest carnivores were also living at that time... So it's a quite unique moment in the history of the planet."

The newly discovered species will be named after the formal study is published. Until then, scientists are simply calling it "the giant."