Was The Bangkok Bombing Driven By Political Violence? 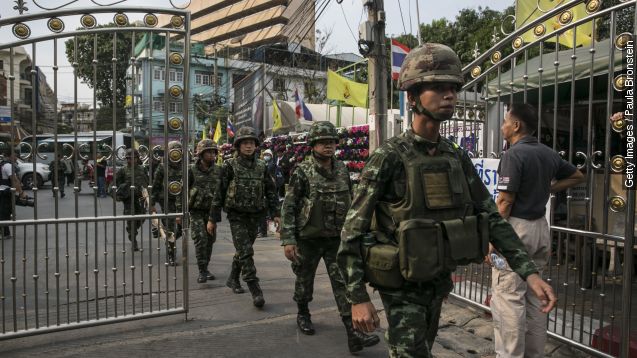 A deadly bombing. A major tourist destination. It had the hallmarks of an ISIS or Al-Qaeda-linked attack. (Video via Voice of America)

But there's a good chance the explosion at one of Bangkok's most popular shrines had nothing to do with foreign terrorists and everything to do with Thailand's domestic turmoil.

A bit of background. The country is currently run by military leaders. They overthrew Thailand's democratically elected prime minister last year after months of anti-government protests. (Video via BBC)

The military succeeded in restoring stability but not in bringing an end to decades-old  tensions between the majority rural poor and the urban-based elite. (Video via CCTV)

But overall, things have stayed mostly calm, aside from a handful of bombings.

Those weren't nearly as big as the blast that struck Bangkok Monday. Bombings of that scale are pretty rare — at least near the capital.

Such attacks are more common in the mainly Buddhist south where the government is fighting a Muslim insurgency. Since 2004, about 6,400 people have died in the violence.  (Video via NTDTV)

In recent months, the separatists have stepped up attacks on Thai security forces.

But what they haven't done is launch attacks outside their comfort zone in the south — much less in Bangkok. (Video via NTDTV)

Plus, Thailand's army chief says the type of bomb used Monday wasn't consistent with what the insurgents typically use.

Still, authorities say it's too soon to rule out any group.

They're currently searching for this man, seen wearing a backpack near the shrine on the day of the attack. (Video via Today)