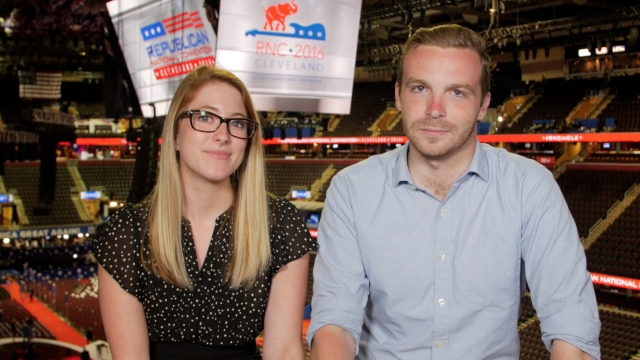 It's Tuesday at the RNC. Kate, I'm wondering what stood out to you from the stage behind us today.

So, I was on the floor, and what was most interesting to me: There were a lot of rumors going around about what the Never Trump movement was going to do. People thought there was going to be some final dramatic standout. Because of that, there were some states that people were like, "Oh, watch out for Virginia or Colorado. Something dramatic is going to happen." So, I go over to Virginia, and they start to walk off the stage and off the floor. And everybody's tweeting, "Virginia's walking out."

This is the drama we've been waiting for.

Right, and I'm standing there, and I have a video.

"We are meeting with the delegation," a Virginia delegate told us. "We are going to conference. Calm down. We are not walking out. We're coming back."

It was very regular, very normal. Everybody was freaking out. It was very interesting. There was a lot of hype, and everybody really wanted something to happen. But we really didn't see that at all.

There was a similar theme outside the convention today. You can see I'm a little sunburned. That's because I was with protesters throughout the day, fewer protesters than anybody in the press had expected. For one, there was this Stand Together Against Trump Coalition march that was set for 5,000 people. Their permit was for 5,000 people in this march. That would be a great amount. About 15 showed up. It was canceled at the last minute.

So, the protests overall? The protests overall have not been what anybody anticipated. Marches that were supposed to number in the thousands numbered in the tens, if that, and the drama even at Public Square today, which was somewhat interesting, was fairly limited. And police did an excellent job in barricading off these separate factions and defusing any tense situations. The police chief in Cleveland, Calvin Williams, who we spoke to, had personally introduced himself to each group that showed up. He has stayed out among the protesters and taken a very hands-on approach to this.

"To make sure that people are allowed to express their First Amendment rights and everybody else the other way, and we don't have any violence," Williams told us.

We should make a note that this is Day Two. So we're halfway into it right now.

That's true. But I think at this point there's not a lot the Never Trump people can do in here because Donald Trump is officially the nominee.

But Donald Trump has yet to speak, so we know that a lot of interesting things could happen still.