Was Mike Huckabee's Critique Of Obamas A Political Move? 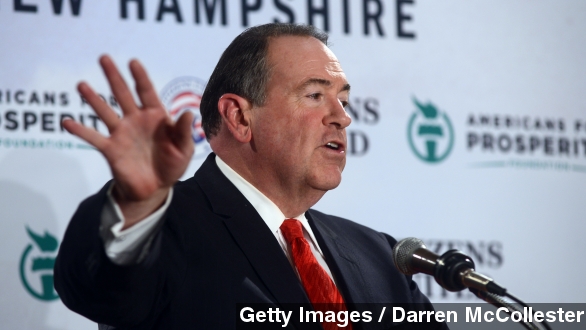 Former Arkansas Gov. Mike Huckabee has stepped down from his prime-time show on Fox News, but that hasn't stopped him from making headlines.

In a People magazine interview about his new book, "God, Guns, Grits, and Gravy," the conservative pundit called President Obama and first lady Michelle Obama "exemplary parents" but questioned their decision-making — specifically, their decision to let their daughters listen to Beyonce. (Video via Fox News)

Huckabee said, in part, "I don't understand how on one hand they can be such doting parents and so careful about the intake of everything … and yet they don't see anything that might not be suitable for either a preteen or a teen in some of the lyrical content and choreography of Beyoncé."

This comes just days after U.S. News & World Report published an excerpt from Huckabee's new book in which he implied hip-hop star Jay Z was pimping his wife, Beyonce: "Does it occur to him that he is arguably crossing the line from husband to pimp by exploiting his wife as a sex object?"

So what's with Huckabee's jabs at Beyonce? It's hard to say, but it could be more about politics than the music she's making.

The R&B singer is an outspoken Obama supporter. She performed at both of President Obama's inaugurations and raised $4 million for the president at a 2012 fundraiser.

As conservative outlet The American Spectator puts it, Huckabee might have chosen Beyonce as the first target of his 2016 presidential campaign.

Huckabee recently slammed Obama for not attending the Unity March in Paris, France, following the attack on a satirical newspaper and a kosher market — telling USA Today he's an "absentee president."

Huckabee has yet to announce whether he will run, but it was widely speculated that a possible presidential campaign is why he stepped away from his show on Fox News.