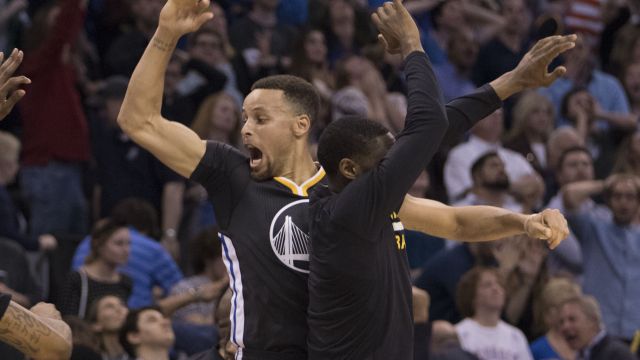 As if Golden State Warriors point guard Steph Curry had any doubters, he once again shut them up with an outrageous performance Saturday night.

Warriors fans held their breath as Curry exited the game in the third quarter after rolling his ankle. But Curry returned to the game minutes later and was vital to the Warriors' success — sinking the game-winner in overtime and tying the NBA record for most 3-pointers in a game all in the same shot.

And once that shot from well behind the arc went in, NBA players collectively lost their minds on Twitter.

Now, this was no "Michael Jordan flu game," but it was as typical Curry as you could get — an off-balance 3-pointer at a clutch moment.

Curry's style has not only baffled NBA players but video game creators, too, who can't seem to replicate what makes him great.

With more than 20 games to go in the NBA regular season, the Warriors have already clinched a playoff spot. Sorry other NBA teams, you'll be getting an extended helping of Curry.

This video includes clips from Under Armour, Degree and images from Getty Images.