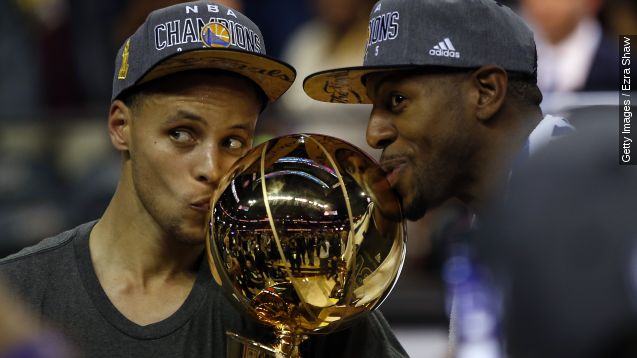 SMS
Warriors Prove 'Small Ball' Can Win NBA Title
By Jamal Andress
By Jamal Andress
June 17, 2015
The Warriors shot and made more threes in the playoffs than any other team and, despite what some may tell you, the small-ball strategy is working.
SHOW TRANSCRIPT

While bringing a title back to the bay after a 40-year drought is impressive, what may be even more impressive is the new style of play and the kind of players the Golden State Warriors used to get there.

Golden State is not a big team. Throughout the Finals, the Cavs grabbed 20 more boards than Golden State. Also, Cleveland's bigs, Tristan Thompson and Timofey Mozgov, had some of their best games of the season during this series.

Mozgov dropped a career high 28 points in game four and Thompson had a career playoff high this series with 19. All the while LeBron James is averaging 36 points and 13 rebounds.

But despite the disparity on the boards, the Warriors played small ball, opting for less height and strength in favor of more speed and scoring (mostly from behind the three-point-line).

The Warriors eventually rolled to a Finals win in six games but their success runs counter to a longstanding argument among NBA enthusiasts.

"He's one of those idiots that believe in analytics. ... Analytics are crap!," Charles Barkley said.

"You gonna tell me a three point shot, is better than a mid-range game?," Karl Malone said.

The Warriors shot and made more three pointers in the playoffs than any other team and, despite what some NBA veterans may tell you, the smaller-is-better strategy seems to be working.

Over the course of the NBA's history, big men have been the stars of the league and some of the most effective players to build a team around. More than a third of the 46 NBA Finals MVPs in history have been centers.

Dynasties like Shaquille O'Neal's Lakers, Tim Duncan's Spurs and Kareem Abdul Jabbar's Lakers have imprinted the "Inside Out" philosophy on the NBA. Teams will pay top dollar and take extraordinary risks to lock down the next great big man.

But over the last few years playing a smaller line-up and hurling up more threes has become an effective strategy — just ask LeBron James.

LeBron James and Miami Heat's big three used the small-ball concept to win two national titles back-to-back. The Miami Heat finished the regular season and the playoffs with the second best three-point percentage in the league.

The Golden State Warriors opted for a similar strategy. When Golden State went down 3-2 in the NBA Finals, Head Coach Steve Kerr sat seven-foot center Andrew Bogut and started the much smaller Andre Iguodala. With the smaller line-up the Warriors won three straight.

It's hard to say if small ball is the strategy of the future or just an NBA trend, but consider this: the final four teams left standing in this year's NBA playoffs were among the league's top-five teams in three-pointers made.