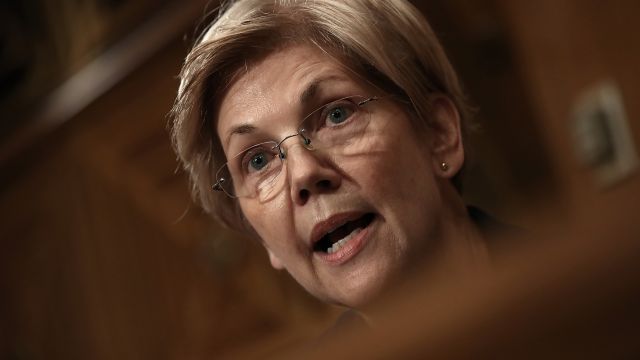 "The only way that Wall Street will change is if executives face jail time when they preside over massive frauds," Warren said.

And as usual, it's some financial malfeasance that set her off.

Today's target, Wells Fargo CEO John Stumpf who is under the glare of Congressional scrutiny after regulators punished his bank for inflating its sales numbers with thousands of phony customer accounts.

Wells Fargo has already fired more than 5,000 employees and paid out $185 million in fines over the issue.

But Warren's rhetoric focused more on the punishing sales culture Stumpf enabled, which led employees to open fake accounts to meet their quotas.

Warren told Stumpf, "You squeezed your employees to the breaking point so they would cheat customers and you could drive up the value of your stock and put hundreds of millions of dollars in your own pocket."

Incidentally, Stumpf's bandaged right hand was apparently injured while he was playing with his grandchildren and not during Warren's excoriation.