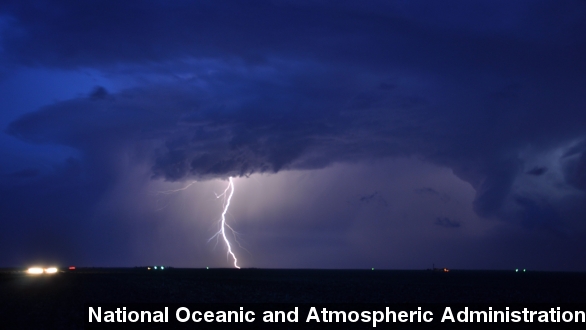 We're used to hearing about how climate change will impact the weather: more storms, more hurricanes. But you might not have thought about another threat that goes hand in hand with severe weather: more lightning. (Video via National Oceanic and Atmospheric Administration)

Scientists at the University of California, Berkeley, say one of the effects of higher global temperatures could be a huge increase in lightning strikes.

Publishing in the journal Science, the study's authors say every degree Celsius of warming could translate to a 12 percent increase in lightning strikes — around 50 percent more by the end of the century.

Lightning is notoriously tricky for climate scientists to predict, but lead researcher David Romps says he's come up with a much better model.

He then turned his model toward climate change predictions stretching out to the year 2100, and found there will be three lightning strikes then for every two that occur now.

The study does have some limitations. For one thing, the relationship between all of the variables Romps studied isn't concrete yet and might not stay the same as temperatures increase. (Video via NASA)

A NASA researcher told LiveScience, "The question is whether something that works in the current climate is also applicable to a climate change."

Lightning strikes kill around 30 people per year in the U.S., but like most other effects of climate change, pose a much greater risk to developing countries. They're also one of the leading causes of wildfires.