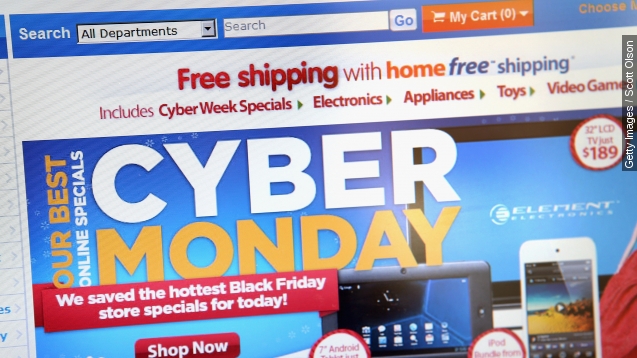 When it comes to holiday shopping, people just can't wait to get out there on Black Friday.

Which is why many retailers have started offering up their deals on Thanksgiving Thursday.

And now, that mentality seems to be spilling over to Cyber Monday, too. Thankfully, waiting in line online is often warmer.

Wal-Mart, one of retail's heaviest hitters when it comes to holiday shopping, is starting Cyber Monday on Nov. 29, the Sunday night of Thanksgiving weekend.

Walmart.com's president and CEO said starting earlier is intended to make shopping easier on people and not make them stay up past midnight to capitalize on deals. (Video via Wal-Mart)

"By starting 'Cyber Monday' hours earlier on Sunday evening and quadrupling the number of Cyber Monday specials, we're making it easier for customers to get ahead of the busiest online shopping day of the year and save on the best gifts." (Video via Wal-Mart)

Cyber Monday's popularity is growing more and more by the year. In 2014, customers dropped more than $2 billion on Cyber Monday, a 17 percent increase from the year before. With Wal-Mart and perhaps other retailers extending the 24-hour deals, that number could go even higher.

Not surprisingly, Wal-Mart is one of many starting their in-store Black Friday deals on Thursday. (Video via KGTV)

But a bevy of other big-name stores are resisting the trend, with Nordstrom, Home Depot, Costco, GameStop, TJ Maxx and more opting to keep Turkey Day sacred.

"We believe a life lived outside is a life well lived. We'd rather be in the mountains than the aisles."

And at least one major brand, outdoor recreational gear retailer REI, will be closed Thanksgiving and Black Friday.

Thankfully, nobody's stopping you from shopping online from your front porch. Just make sure you've got a strong Wi-Fi connection for Cyber Sund — I mean, Monday.