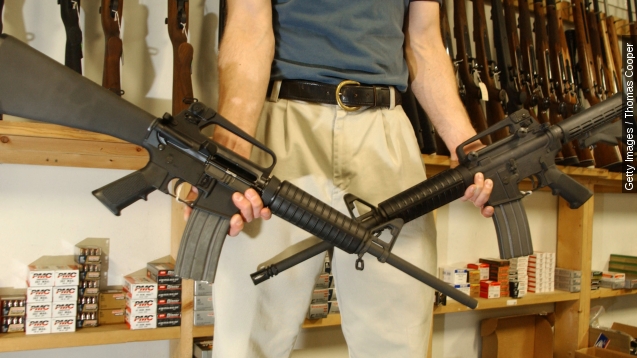 SMS
Wal-Mart Dropping Assault Rifles Over Sales, Not Politics
By Ben Lawson
By Ben Lawson
August 26, 2015
Wal-Mart's decision to drop guns commonly used in mass shooting may have little to do with politics and current events.
SHOW TRANSCRIPT

Wal-Mart, the nation's largest seller of guns and ammunition, says it plans to stop selling semi-automatic rifles in its stores.

A Wal-Mart spokesman told BearingArms.com Tuesday the move was more about consumer demand than anything political. The stores will instead stock guns that sell better, like hunting rifles. (Video via Wal-Mart)

But the news came at a very political moment. The next day, a shooter in Virginia killed two journalists and injured another, and the Wal-Mart news quickly got swept up in the gun control debate.

One of the guns Wal-Mart will no longer sell, the AR-15, has been used in multiple mass shootings in recent years, including the 2012 school shooting in Newtown, Connecticut.

One of Wal-Mart's shareholders, Trinity Church in New York City, actually tried to get the retailer to stop selling guns with high capacity magazines after that incident. Eventually, the church lost a court case over whether it had a say in the matter as a shareholder. (Video via Wal-Mart)

But Wal-Mart is already more careful with its gun sales than many other businesses. In fact, its policy is even more stringent than federal law.

The federal three-day policy became part of the conversation again after the shooting in Charleston, South Carolina, in June. Dylann Roof was allowed to purchase a gun when his background check didn't come back after three days.

Instead of just pulling its AR-15s and shotguns that hold seven or more rounds, Wal-Mart will move to quickly sell them off and replace them with firearms that typically sell better.