Wal-Mart Announces Pay Raise For Half A Million Employees 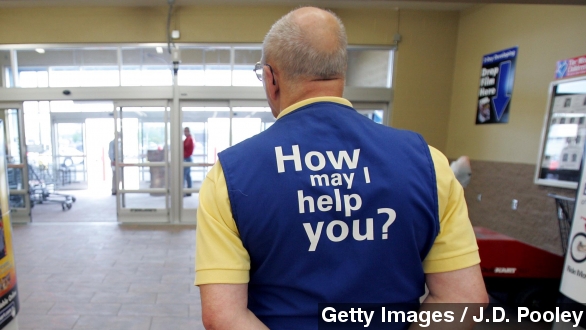 The nation's biggest company — and one of the most scrutinized regarding worker wages — is now giving a raise to nearly 40 percent of its employees.

Wal-Mart announced Thursday it will give raises to about 500,000 of its 1.3 million U.S. employees — bumping starting pay to at least $9 an hour starting in April and promising current employees $10 an hour by next year.

"It's clear to me that one of the highest priorities today must be an investment in you, our associates," Wal-Mart CEO Doug McMillon said.

Nine dollars an hour would put employees at least $1.75 above the federal minimum wage.

And $10 an hour would be a big step toward President Obama's goal of raising the federal minimum wage to $10.10 an hour.

"Say, 'Yes.' Give America a raise," President Obama said in his 2014 State of the Union speech.

But will Wal-Mart's pay bump be enough? Employees have said they're dependent on food stamps to get by — food stamps they sometimes spend at Wal-Mart.

A CNN reporter interviewed a Wal-Mart employee for a 2013 story.

"Are you able to get by on the money you make from Wal-Mart?" the reporter asked.

"Not at all," said the Wal-Mart employee.

A $9 an hour salary still only translates to about $18,720 a year — above the 2015 federal poverty line for a household of two but below the line for a house of three. So a single parent with two or more kids? You're out of luck.

Protests around the nation ratcheted up the past couple of years with Wal-Mart workers demanding pay raises as high as $15 an hour.

Analysts disagree over whether that's realistic.

"Those are the greatest people in the world that work at Wal-mart. I'd like for them to be paid more, but I don't want them to lose their jobs," said Ben Stein on Fox News.

"These morons want to make people lose their jobs. Just get them out of the way," said Gary Kaltbaum.