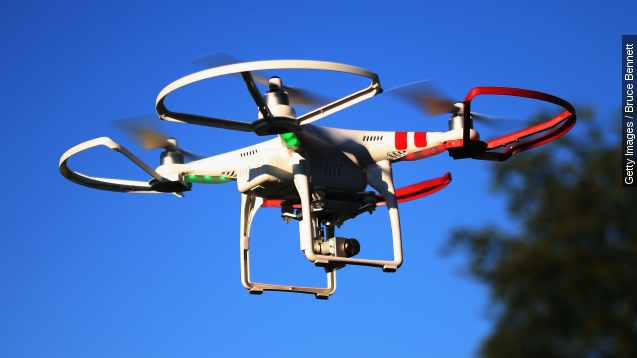 We're used to tech-savvy companies like Amazon and Google experimenting with drones. But when Wal-Mart — a company known more for its low prices than its tech chops — gets on board, that's really something to talk about. (Video via Amazon)

According to FAA documents first acquired by Reuters, Wal-Mart has asked for permission to test drones for a variety of situations, including home delivery. (Video via Drone Footage / CC BY 3.0)

The retailer also wants to test the drones for grocery pickup. Wal-Mart currently lets customers place an online order and park in a designated space for curbside delivery of the items. But in this scenario, instead of a human bringing your groceries to you, a drone would fly them to you. (Video via Wal-Mart)

Remember — the FAA is still figuring out the rules and regulations for commercial drone use. In the meantime, companies can test drones as long as they get permission.

Apparently Wal-Mart had already been testing drones made by popular drone maker DJI. Wal-Mart was able to fly under the radar — pun intended — by flying the drones indoors. (Video via DJI)

The retailer reportedly plans to use the unmanned aerial vehicles for internal operations, as well. It wants to use drones to manage inventory.

Still, if you can't quite picture your grandfather answering the door for his Wal-Mart drone delivery, you're not alone. NPR reports most Americans aren't sold on the idea of drones making deliveries.

Then again, maybe all it takes is the world's largest retailer to push drone delivery into the mainstream. (Video via DJI)