Voters Want Elizabeth Warren And Newt Gingrich For The 2016 Veepstakes 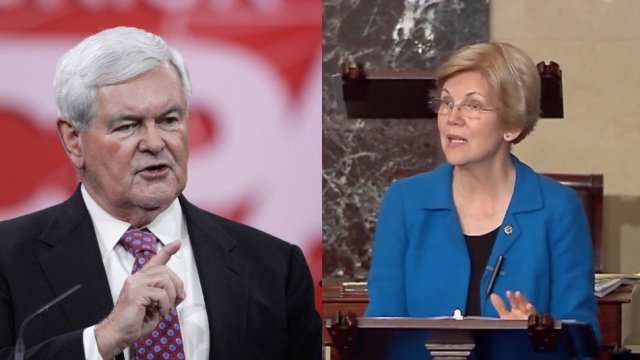 By Stephanie Liebergen
June 15, 2016
Supporters of Hillary Clinton and Donald Trump were asked whom they'd like to see as their favorite candidate's running mate.
SHOW TRANSCRIPT

A lot of people have thrown out a lot of opinions about who should be on the ticket with Hillary Clinton and Donald Trump. Now the American public is throwing in its opinion, too.

Bloomberg Politics polled supporters of both candidates and asked who they thought would be the best pick.

For Trump, former Speaker of the House Newt Gingrich came out on top with 29 percent support. But he was followed closely by former presidential candidate Sen. Marco Rubio at 24 percent, and that 5-point difference is within the margin of error.

Trump has said that Gingrich is on his "short list," but Rubio explicitly stated that he doesn't want to be on the ticket with Trump.

It's important to note that this is just a poll, and opinions change. Just a few months ago, Ben Carson was the people's top pick as Trump's VP.

Americans' pick for Clinton's running mate was a little clearer. Sen. Elizabeth Warren got the most votes with 35 percent. Gaining about half as much support was Sen. Cory Booker with 17 percent, and then U.S. Secretary of Housing and Urban Development Julian Castro at 12 percent.

One small problem for the fans of Julian Castro as VP: He doesn't want the job.

And there's also a potential snag for the Warren supporters. If Clinton and Warren were to win, Warren would need to vacate her seat in the U.S. Senate, and the Republican governor of Massachusetts would choose her replacement.

The final decision for each candidate will likely come much closer to their parties' conventions. Both conventions happen in the second half of July.