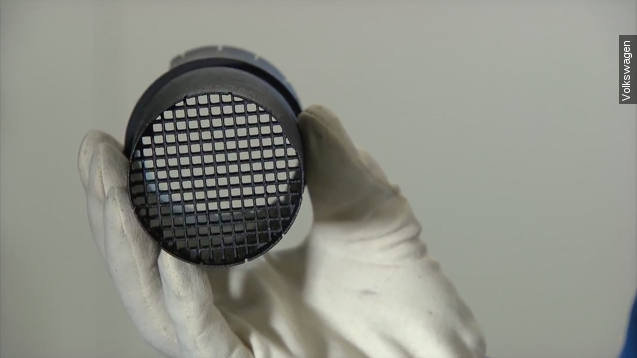 SMS
Volkswagen Reveals EU-Only Fix For Cheating Engines
By Matt Picht
By Matt Picht
November 25, 2015
Volkswagen says a software update and a new filter are all that's needed to bring its cars in line with EU emissions regulations.
SHOW TRANSCRIPT

After cheating on emissions tests, Volkswagen is trying to make things right with its European customers. Lucky for its bottom line, that process might not be as expensive as Volkswagen thought.

"This component stabilizes the airflow and allows a more precise measurement of the incoming fresh airflow," a company executive said.

According to a new video, Volkswagen plans to bring its errant engines back in line with a software upgrade and a new filter. The fix covers almost all of the 8.5 million European vehicles expected to be recalled, and the company says it should take between 30 minutes to an hour per vehicle.

Once repaired, the cars should constantly gauge the amount of emissions they're outputting and adjust engine combustion to match EU guidelines. Previously the cars were only meeting emissions guidelines in lab tests and ignoring them while on the open road.

This fix won't apply to the almost half a million American cars affected, though — U.S. regulations are much stricter than European ones. Volkswagen has submitted a plan to regulators for dealing with those cars, but it hasn't been approved, and we don't know what it entails yet.

Still, U.S. Volkswagen owners are getting a nice consolation prize: a $500 prepaid Visa card and $500 worth of credit at VW dealerships.

Despite the unexpectedly easy fix for the EU, Volkswagen does not plan to lower its $7.1 billion projection of how much it will cost to deal with the scandal.