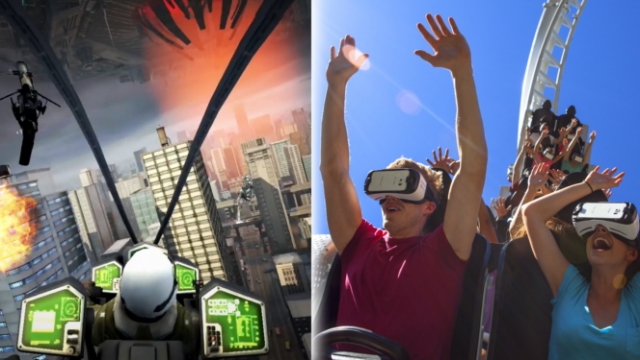 SMS
Virtual Reality On Six Flags Roller Coasters Seems A Little Pointless
By Ben Lawson
By Ben Lawson
March 3, 2016
Six Flags will offer virtual reality experiences on some of its rides, but isn't the reality of a theme park good enough?
SHOW TRANSCRIPT

Samsung and Six Flags are teaming up to launch what might be the most unnecessary virtual reality experience yet.

Soon, you can hop onto a Six Flags roller coaster, strap on a Samsung Gear VR headset and be transported to a virtual fight with Superman or to some kind of battle with aliens.

Which might be cool if you weren't already on a roller coaster. Shouldn't that be exciting enough? Plus, it seems like motion sickness would be an issue.

Six Flag says the screen is synced precisely to the ride, and it'll need to be if it doesn't want to have a huge, disgusting mess on its hands.

The VR experience is simply being added to some of Six Flags' existing roller coasters and is optional for riders. It'll debut at nine parks across the U.S.

But despite this arguably unnecessary use of VR, it does show that companies aren't looking at the tech as just a passing fad, but something that is potentially here to stay.

Still, considering you can buy a VR headset for your home and, you know, ride a roller coaster from your couch, the company might want to find a use that doesn't make going to its parks seem pointless.

This video includes clips from Six Flags and images from Getty Images.