Virginia A Much Closer Race Than Expected 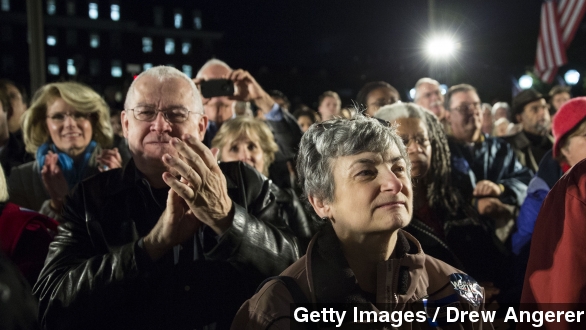 Pollsters put incumbent Democrat Mark Warner so far ahead of Ed Gillespie that Virginia’s U.S. Senate race didn’t even appear in many “races to watch” lists. (Via The Wall Street Journal, The Guardian, The Boston Globe)

But it was definitely a race to watch Tuesday. The contest that no one really expected to be this close was. With 99.5 percent of precincts reporting, Warner was leading by half a percentage point. Before midnight he was giving a victory speech.

"I want to congratulate Ed Gillespie. ... I wish him well, and I wish his family well."

But expect a recount. In Virginia, recounts aren't automatic but can happen if the loser goes down by a less-than-1-percent margin.

Not long after Warner's speech, Gillespie was telling his supporters to get a good nights' sleep — signaling he wasn't ready to accept Warner's declaration of victory. (Video via WDBJ)

So how did it get this close? Gillespie — following something of a national trend — was one of many Republicans who campaigned like he was running against the president.

GILLESPIE: “The Obama-Warner policies are hurting us.”

GILLESPIE: “Mark Warner votes with President Obama 97% of the time. … I’ll be a check on Obama, not a blank check for him.”

And apparently, there was something to Gillespie’s strategy. You could say Warner's super close victory was something of a win for Gillespie, considering what at one point was an almost 30-point lead for Warner. (Video via PBS)

It’s not a novel strategy — not even to this campaign season.

Running against Obama — and specifically ObamaCare — was a strategy Ken Cuccinelli used in the state’s gubernatorial race last year. He lost, but it was — also — a closer race than expected.

ABC: “This race came down to the wire because of Obamacare.”

Mark Warner is a former governor who was actually pretty popular in Virginia.

Then again — Politico’s Byron Tau suggested that might have been the problem for him: outside groups thought it was safe to divert resources to other more hotly-contested races.

But Warner didn’t necessarily need more money. He raised more than double his opponent: $16 million to Gillespie’s $7 million. Gillespie, in fact, had to cancel ads a few weeks ago because he’d run out of money.

And apparently Warner’s attacks against Gillespie’s record as a lobbyist didn’t stick as hard as he might have hoped they would.

MARK WARNER FOR VIRGINIA: “His firm even lobbied for five foreign governments.”

Ultimately, with Obama’s job approval on the decline in Virginia, it’s hard to argue Gillespie’s anti-Obama strategy didn’t at least play a role in his late push Tuesday.