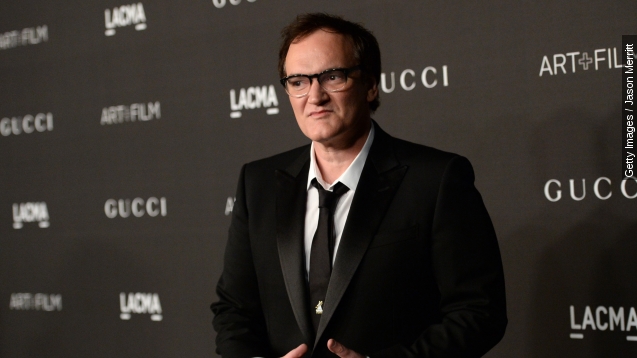 SMS
Violent-Film Director Really Doesn't Like Real-Life Violence
By Lexie Hammesfahr
By Lexie Hammesfahr
October 27, 2015
Quentin Tarantino might create extremely violent movies, but he says he's against violence in real life and has said that for at least a decade.
SHOW TRANSCRIPT

Initially, Quentin Tarantino's participation in a New York anti-police brutality rally sparked outrage from the New York Police Department, which called for a boycott of the famous director's films.

Now, that boycott has been endorsed by the National Association of Police Organizations, a group that represents over 241,000 officers throughout the country. New Jersey, Florida, Wisconsin and Las Vegas officers joined the boycott by early Sunday.

The boycott stems from comments Tarantino made at the protest.

Patrick Lynch, the president of the NYPD union, said in a statement, "It's no surprise that someone who makes a living glorifying crime and violence is a cop-hater, too." (Video via The Weinstein Company / "Inglourious Basterds")

The comments even sparked an intense debate on Fox News' "The Kelly File."

Okay, yes. Tarantino's films can sometimes reach outrageous levels of violence, but just because he has a violent flare in his movies doesn't necessarily mean he promotes real-life violence. (Video via The Weinstein Company / "Django Unchained")

In fact, he told NPR there are two types of violence in "Django Unchained": the violence against the slaves and Django's revenge. He said, "That's movie violence, and that's fun, and that's cool, and that's really enjoyable. It's kind of what you're waiting for."

And then there's this heated exchange. Tarantino lost it when an interviewer asked him if there's a relationship between violent movies and real-life violence.

And he told Newsday in 1994 (the same year "Pulp Fiction" hit the big screen) that real life violence is "one of the worst aspects of America." That same year, he told the Orlando Sentinel, "I have no problem with screen violence at all, but I have a big problem with real-life violence."

Looking back, Tarantino has spent more than a decade separating his knack for movie violence from his distaste for violence in reality. However, Tarantino did tell the New York Post the timing of the rally was "unfortunate."