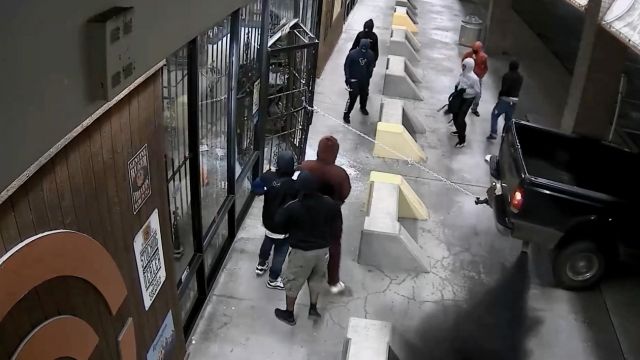 SMS
Video Shows Thieves Using A Truck To Rip The Door Off Of A Gun Store
By Ben Lawson
By Ben Lawson
March 3, 2016
Surveillance footage appears to show the suspects entering the store and stealing about 50 weapons.
SHOW TRANSCRIPT

Three people have been arrested in connection with a robbery at a Houston gun store.

Police released video of the incident, which appears to show a truck ripping the door off the building; then, as many as 10 suspects rush inside.

The suspects carried armfuls of guns before fleeing. The entire incident only took about two and a half minutes. Officials said they made off with more than 50 weapons.

Authorities say some of the weapons were recovered but didn't say how many.

The Bureau of Alcohol, Tobacco, Firearms and Explosives told KHOU these types of incidents are happening more often in Houston. Officials say thieves often sell stolen guns to criminal gangs, who use them in violent crimes.

This video includes clips from Houston Police Department and KTRK.