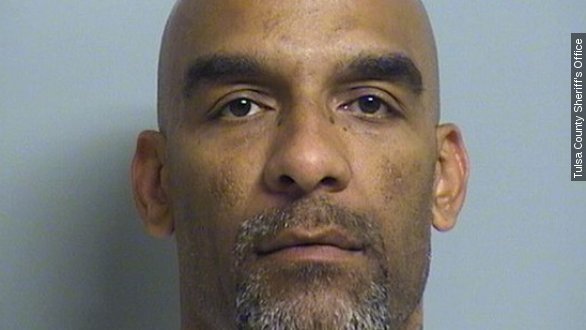 A video of a reserve police deputy shooting an unarmed man in Oklahoma has been released at the request of the victim's family. (Video via KJRH)

"Did Bob Bates ever have a taser on him at the time of the shooting? What kind of gun did Bob Bates use? That is my question," said Andre Harris, the victim's brother.

The family of Eric Courtney Harris is calling for transparency after the 44-year-old was fatally shot April 2.

The Tulsa County Sheriff's Office Violent Crimes Task Force says officers were conducting an undercover operation involving the sale of guns and ammunition with a convicted felon who they identified as Harris.

The sheriff's office said arresting deputies believed Harris might have been armed at the time of his arrest because his hands were near his waist. (Video via KJRH)

The released footage appears to show Harris running from officers. KJRH reports the arresting officer, Robert 'Bob' Bates, said he intended to reach for his stun gun instead of his firearm. The Tulsa County Sheriff's Office confirmed the gunshot was from Bates' personal .38 caliber gun. Bates can be heard on video saying, "I shot him. I'm sorry." (Video via KJRH)

Bates has been placed on administrative leave.