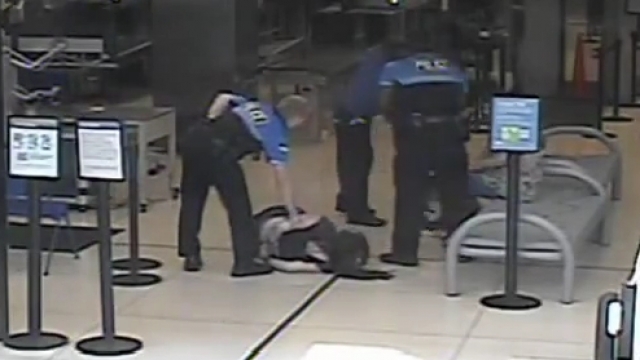 And video footage of the incident that triggered the suit has just been released.

Her mother, Shirley Cohen, told local media back when the lawsuit was filed that the teen accidentally set off a metal detector at a security checkpoint, which frightened her.

As the teen resisted, Shirley Cohen tried to tell security officials her daughter is partially deaf, blind in one eye and easily confused as a result of her aggressive cancer treatment.

But as security footage obtained by The Commercial Appeal shows, they swiftly tackled her daughter to the ground.

Shirley Cohen later described the altercation to reporters: "She's trying to get away from them, but in the next instant, one of them had her down on the ground and hit her head on the floor. There was blood everywhere."

Hannah Cohen was arrested and sent to jail. Authorities later threw out the charges, but the Cohen family is seeking $100,000 in physical and emotional damages.

The lawsuit accuses the TSA agents and airport police of discriminating against Hannah Cohen and not providing a reasonable accommodation for screening her. They say the airport is also at fault for failing to properly manage its personnel.

As of Friday morning, Memphis International Airport, the airport police and the TSA hadn't commented on the suit.

Correction: A previous version of this video said TSA agents tackled Hannah Cohen, but airport police were actually involved. The video has been updated.