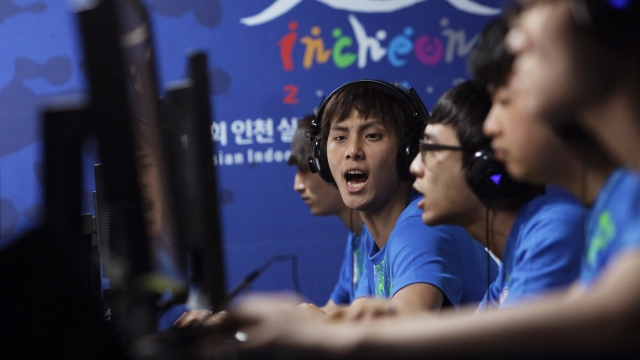 SMS
Video Gamers Are Athletes, According To The Japanese Government
By Carter Woodiel
By Carter Woodiel
April 3, 2016
Two South Korean professional gamers have obtained work visas to compete for a Japanese team. A first-of-its-kind decision for e-sports competitors.
SHOW TRANSCRIPT

It's official: Professional video gamers are just like other athletes, at least in the eyes of the Japanese government.

Two South Korean gamers are now free to suit up for a Japanese professional e-sports team, thanks to work visas they received from Japan's Ministry of Justice. It's the first time e-sports athletes have received such a visa.

Essentially, Japan is acting as it usually does when foreign athletes are drafted by a Japanese sports team. But this time, instead of playing soccer or basketball, they're playing "League of Legends."

"League of Legends," which features two teams facing off in an online battle, is one of the world's most popular video games for e-gamers.

And if you don't think "League of Legends" athletes are worth star treatment, think again. Last year's world championship final peaked at 14 million viewers, roughly on par with viewership for last year's World Series here in the U.S.

The year before that the world final was held in a World Cup soccer stadium in Seoul, South Korea, complete with 40,000 live spectators.

But the popularity of e-sports is lagging in Japan compared to the rest of the world, something that could be helped along by acquiring foreign talent to play for Japanese teams.

The Japan eSports Federation, which was founded about a year ago, called the Japanese government's decision a "historic event that officially recognizes professional e-sports players as being equal in status to competitors in other sports."

Americans will soon have firsthand experience with the highest levels of "League of Legends" play. This year's world championship will be held in the U.S., with the final at the Staples Center in Los Angeles.

This video includes clips from ESPN, Riot Games and BBC and images from artubr / CC BY 2.0 and Getty Images.