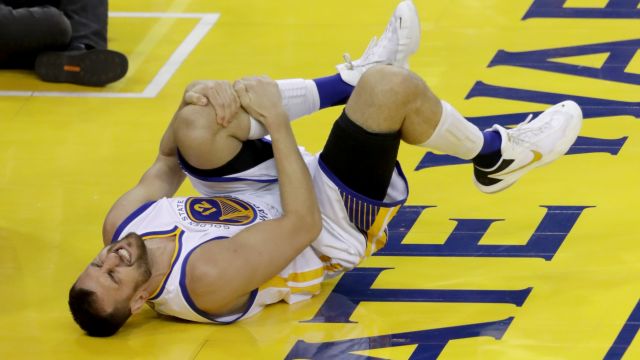 "It's kind of crazy. I was actually doing my sports medicine training, and I had recently bought an Xbox video game system. I was playing around with it and doing a game where you had to move around. The character was controlled by your movements. I immediately thought, 'Wait, could we use this for medical research?' … It's been about three or four years now, and we're finally to a point where we have software that we're able to go out to high schools and to gyms and actually test high school male and female athletes and look at the way they jump and land," Dr. Aaron Gray said.

This is Dr. Aaron Gray, a sports medicine doctor at the University of Missouri.

"It's portable, it's lightweight and it doesn't take any markers. So that way, you can put people through, and you can test them very rapidly. … We're trying to bring expensive lab-based tests to the masses. We want to make things that have been proven in the lab through previous medical research and make those accessible to any athlete anywhere in the country or anywhere in the world," Gray said.

Female athletes are four to six times more likely to tear their ACLs compared to male athletes in the same sport. A number of factors — from knees caving in to favoring one knee over the other to even hormones — can put female athletes at a higher risk.

"Some studies have shown that people who tear their ACL, they're at much higher chance of arthritis, even like 10 to 15 years later. … So what we don't want to see is women who are 25 or 30 years old who are starting to have arthritis, and that's all because they've torn their ACL," Gray said.

ACL injuries can be devastating and sometimes career-altering. Athletes usually aren't sport-ready until at least six months after surgery. And with the estimated cost of surgery plus rehab reaching $25,000 in some cases, you can see a torn ACL requires a lot of time and money.

A brand-new Microsoft Kinect can be purchased for just $100.

"I have a 2-year-old daughter, so I'm hoping in 10 years that I can test her and be able to show her a prevention program that will prevent her from tearing her ACL," Gray said.