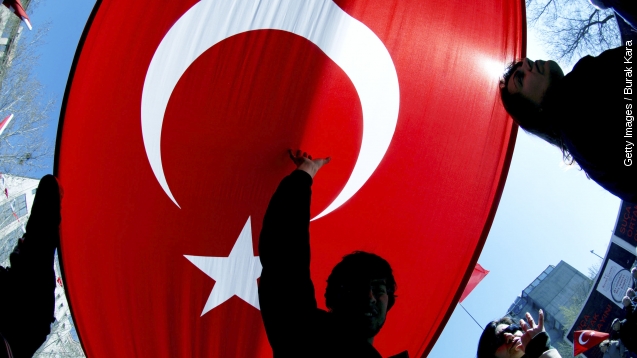 By Steven Sparkman
August 31, 2015
The arrest of two British journalists covering Turkey's unrest for Vice News is being called an act of censorship.
SHOW TRANSCRIPT

Two British journalists who were arrested in Turkey have been charged with having links to terrorism, a move that was immediately condemned by human rights groups. (Video via Vice News)

Jake Hanrahan and Philip Pendlebury work for Vice News and were covering the flare-up in violence between the Turkish military and Kurdish militants. (Video via Voice of America)

Turkish officials reportedly said the journalists were accused of being in close contact with a terrorist group.

It's true the Vice reporters have gotten incredible access to terrorist groups before, ISIS being a prominent example.

But Vice portrayed the reporters' work as "vital coverage" in an area where press freedom is evaporating.

Ever since, militant groups have continued attacking police, and the Turkish military has repeatedly carried out airstrikes against militant camps. (Video via BBC)

International groups have called the reporters' arrest a form of censorship in an important region. The Committee to Protect Journalists said, "Authorities ought to protect, not gag journalists on the job." Amnesty International called the terrorism charges "unsubstantiated, outrageous and bizarre."