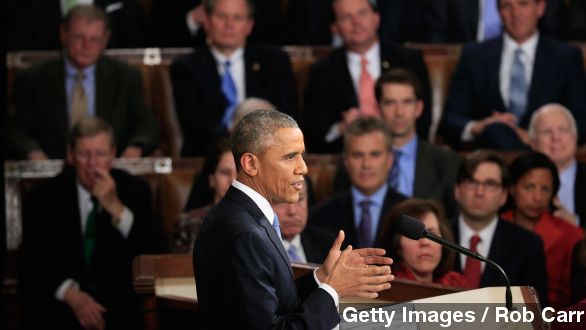 SMS
Veto Standoff Ahead After Congress Passes Keystone XL Bill
By Ben Levin
By Ben Levin
February 11, 2015
President Obama has already said he will veto the Keystone XL pipeline bill, but Congress decided to send it to his desk anyway.
SHOW TRANSCRIPT

The House passed a bill approving the controversial Keystone XL pipeline Wednesday, sending legislation to President Obama that is expected to become the first major veto of his presidency.

Of those 270 yea votes, 29 were from Democrats, mostly from swing districts. The President has 10 days to either sign or veto the bill.

The vote is the latest chapter in the four-year saga of the Keystone XL pipeline, which, depending on who you talk to, is either the key to America's economic recovery or an environmental catastrophe waiting to happen. (Video via The Washington Post)

Republicans claim it's the former, and say it's directly linked to creating tens of thousands of American jobs.

“A Keystone pipeline veto would send the signal that this President has no interest in listening to the American People," House Speaker John Boehner said.

But Democrats dispute that number, and say the pipeline, which would connect Canada's oil fields to Texan refineries, could be "game over" for the environment.

"Our Republican colleagues say this is a jobs bill, but that’s really not true at all," Senator Chuck Schumer said.

Rhetoric aside, the pipeline isn't getting much closer to being built: the President has already promised to veto the bill, saying he's waiting for a State Department review of the project.

So if everyone knows the president is going to veto the bill, why spend time getting it through Congress?

The answer is that Keystone XL has become a symbol for a much larger fight between Democrats and Republicans.

Democrats are using Keystone XL to show they're focused on global climate change, while Republicans consider the pipeline a great example of how they want to create jobs, not hug trees.

Republicans don't have the votes to override Obama's veto, which means Wednesday's vote is mostly symbolic — and that Keystone XL can continue to be a political football for the time being.