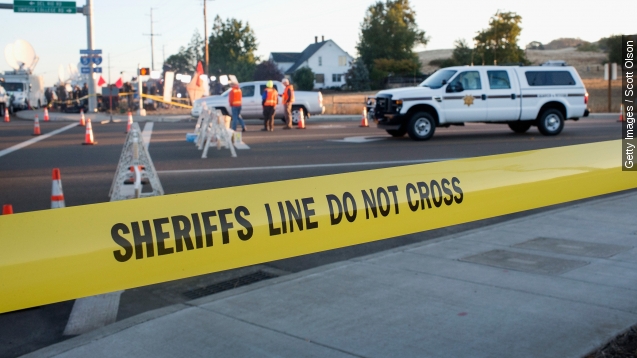 SMS
Veteran Shot 7 Times At Umpqua College Hailed As Hero
By Ben Lawson
By Ben Lawson
October 2, 2015
Army veteran Chris Mintz is praised as a hero for trying to save others during a shooting at an Oregon community college.
SHOW TRANSCRIPT

A GoFundMe page for an Army veteran injured while trying to save others during Thursday's shooting at an Oregon community college has surpassed its goal of $10,000 several times over after just a few hours.

Chris Mintz, the father of a 6-year-old boy, was shot seven times and both of his legs were broken during the incident. (Video via NBC)

"He ran to the library and pulled the alarms and he was telling people to run, grabbing people, telling them, 'You just have to go,'" witness Hannah Miles told ABC News.

Witnesses say Mintz was trying to block the gunman from coming through a door when he was shot the first three times and was then shot several more times while on the ground.

Mintz is still recovering at the hospital and told ABC News, "I just hope everyone else is OK."

The GoFundMe page is to help Mintz and his family pay for medical expenses as he undergoes physical therapy for his legs. (Video via KGW-TV)