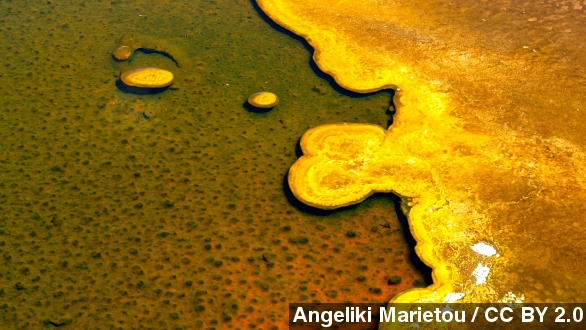 The mats are big groups of microscopic organisms, like bacteria, which usually develop in aquatic or semi-aquatic environments. (Video via Smithsonian Institution)

They're some of the oldest living things we have fossils of. One found in Western Australia dates back some 3.5 billion years: just a billion years younger than the Earth itself. (Video via Old Dominion University)

Specifically, from pictures taken by the Curiosity rover in Gale crater, of an area thought to have once possibly been an ancient lakebed — the perfect environment for those mats to develop. (Video via NASA)

Noffke points to patterns of erosion on our Earthbound mats and compares them to similar-looking patterns photographed on Mars' surface, highlighting the zig-zags at the edge of the plateau.

Noffke didn't just notice the similarity in passing either — she told Discovery News she "spent several weeks investigating certain images centimeter by centimeter, drawing sketches, and comparing them to data from terrestrial structures."

It seems to make sense that if life developed on Mars it would resemble such an ancient form of life on Earth — NASA has noted that 3.5-3.8 billion years ago, Mars much more closely resembled Earth, and those microbial mats from Australia are about the same age.

But we probably won't know for sure for quite a long time — Curiosity lacks the facilities necessary to test samples from the possible mats, which would need to be examined microscopically. (Video via NASA)

Still, Curiosity has made important discoveries that point in that direction. In December, the rover found methane and organic compounds, which could also point to life, in Gale crater. (Video via NASA)

And Noffke says with all the evidence she's found, if it is just a chance resemblance, it would be an "extraordinary coincidence."