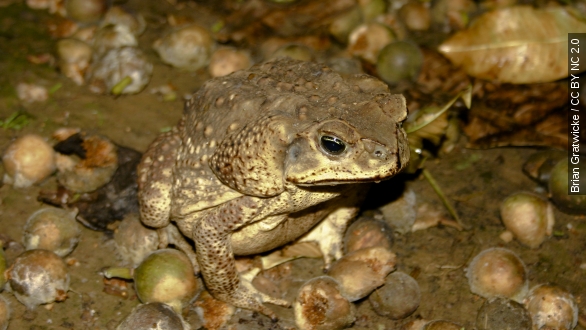 That urgent warning is one Florida residents get around this time every year — about a toad.

The cane toad — Rhinella marina — is a species of toad originally found in South America up through Southern Texas. (Video via Al Jazeera)

It's become an invasive species in Florida, the Caribbean and Australia, thanks to human intervention. (Video via BBC)

In the 19th and 20th centuries, the toad was introduced to try to preserve sugar cane crops around the world, with producers hoping it would eat pests. (Video via This Week in Louisiana Agriculture)

While it failed spectacularly to control pests in almost every place it was introduced, in some environments, it succeeded in killing off indigenous species. (Video via Discovery)

In Florida, it's killed off pets. Dogs and cats can ingest the venom from eating or playing with the toads, and it can often be fatal.

A veterinarian told WFTS, "It doesn't take very much of this toxin to cause the arrythmias and the seizure activity."