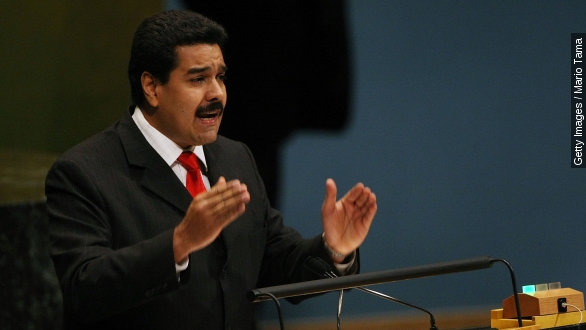 While most media outlets were watching for this meeting between Cuba’s Raul Castro and President Obama at the summit of the Americas...

Latin America observers were actually holding their breath over the dynamic between Obama and a different leader: Venezuela’s Nicolás Maduro.

Things have been tense between the U.S. and Venezuela, to say the least. In the past few months there have been coup accusations, sanctions, military exercises and fiery rhetoric.

On Saturday Maduro took that fiery rhetoric to the international stage at the Summit of the Americas. During a biting speech, he said he doesn’t trust Obama but wants to resolve differences.

And he brought a petition to the summit that he said had 10 million signatures — including Bolivia's president, seen in the white shirt — asking Obama to lift the sanctions he imposed on seven Venezuelan officials accused of human rights abuses.

As is the case with many U.S. tensions, oil is at least partially to blame here.

One of the U.S.’s goals at the summit was promoting more interconnected energy policies in the region, according to Assistant Secretary of State for Western Hemisphere Affairs Roberta Jacobson.

And in Jamaica on Thursday Obama announced a $20 million dollar initiative to promote more clean energy in the Caribbean and Central America.

This all builds off of a meeting Joe Biden had a couple months ago to promote energy independence in the Caribbean.

“It’s profoundly in the self-interest of the United States to see the Caribbean countries succeed as prosperous, secure, energy-independent neighbors,” Biden said.

But when the U.S. talks about more energy independence in the region, that inherently means less dependence on Venezuela.

Maduro sees these pushes from the U.S. to diversify energy sources in the Caribbean and Central America as an attempt to financially destabilize his government.

But the State Department has called these accusations ludicrous.

Maduro's criticism hasn't seemed to phase Obama, who stuck to his energy goals at the summit.

“Energy costs are typically three times higher than what we pay in the United States," said Obama. "It's a huge impediment to their development. To the extent that we can create a single regional energy market, then the costs of production, of transmission, distribution of energy becomes cheaper for all the countries involved, and you get certain economies of scale.”