Venezuela's Political Crisis Is Devolving Into A Humanitarian One 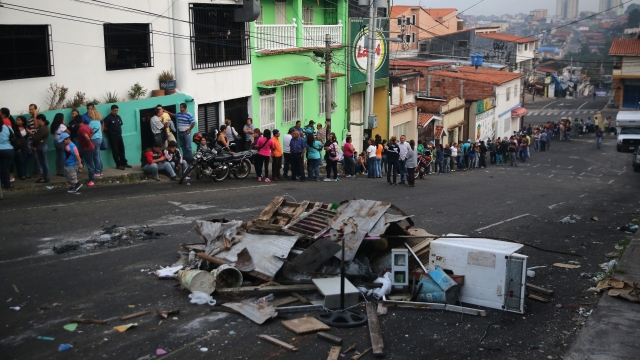 Venezuela's economic and political crisis continues to devolve into a humanitarian one. A lack of access to food and normal household items has led to rioting and clashes with police.

According to reports, rioters have attacked delivery vehicles hoping to find something to eat. In a recent study, 87 percent of people said they didn't have enough food; there are even reports of people dying in food lines.

The country has been in economic decline for years now, thanks in large part to political mismanagement and corruption. The country's massive oil reserves haven't helped much because of low oil prices worldwide, and inflation is heading toward more than 700 percent.

In an attempt to save resources, Venezuela's embattled President Nicolás Maduro put food distribution under the control of local citizens committees. But critics say those committees are biased toward people who are supportive of Maduro's government.

Maduro's administration says the crisis is overblown. According to The Washington Post, it's blamed the protests and riots on "an economic war led by foreigners and private businessmen who, it claims, are hoarding food supplies to destabilize the government."

It's hard to see how the country can safely escape the situation it's in without some type of intervention. U.S. Secretary of State John Kerry has supported "a fair and timely recall referendum" on Maduro's presidency.

This video includes an image from Getty Images and clips from Al Jazeera, U.S. Department of State, TeleSur, CNN, BBC and Fox News.