Vatican's Recognition Of Armenian Genocide Is Nothing New 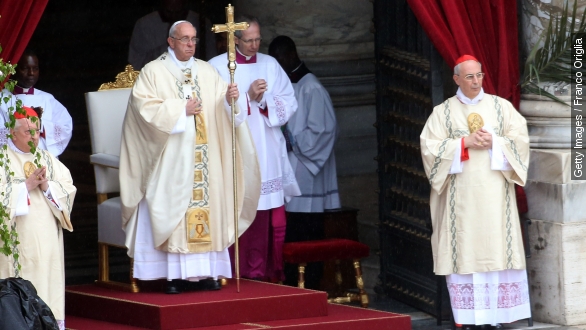 The pope's recognition of the Armenian genocide, which drew anger in Turkey, might seem like the latest in a long line of controversies Pope Francis has sparked. (Video via Vatican)

But it's actually a relatively well-trodden issue, not just in Pope Francis' papacy, but earlier.

The Armenian community, along with historians, contend that the Ottoman Empire — predecessor of the modern Turkish state — systematically tried to exterminate the Armenian population from the country during the first World War.

Turkey maintains the killings, which historians have estimated cost the lives of as many as 1.5 million Armenians, were part of a broader war and not systematic genocide.

Turkey's foreign minister tweeted Sunday, "The Pope's statement, which is out of touch with both historical facts and legal basis, is simply unacceptable."

The Armenian Apostolic Church's ties with Rome go back hundreds of years, so it's not surprising that the Vatican supports the Armenian cause.

In 2000, Pope John Paul II recognized the genocide in a joint declaration with the Armenian church's patriarch. (Video via Yad Vashem)

Pope Francis' own ties to the Armenian church stem from his relations with the Armenian community in Argentina, one of 22 countries which recognize the genocide. (Video via Canal21 Buenos Aires)

And in 2013, early in his papacy, Pope Francis said the same thing he echoed today: that the Armenian genocide was the first genocide of the 20th century. (Video via Armenian Church)

Turkey is so opposed to the recognition of the genocide, the country has criminalized commenting on it in the past. In 2007, it convicted two men for printing that the 1915 killings were a genocide.

In response to the pope's comments on Sunday, Turkey even withdrew its ambassador to the Vatican. (Video via Institute for Cultural Diplomacy)

This video includes images from Kingfield Press, Near East Foundation and ogannes / CC BY SA 2.0.