Vatican's Opinion On Climate Change Is Getting Political 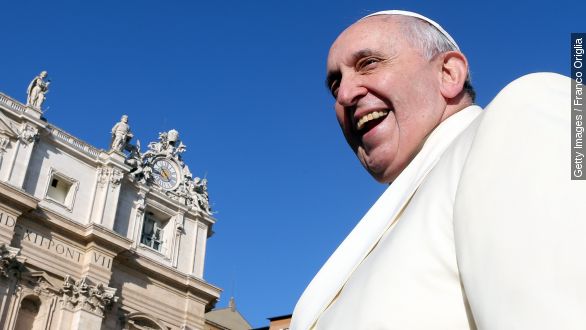 SMS
Vatican's Opinion On Climate Change Is Getting Political
By Matt Moreno
By Matt Moreno
April 28, 2015
The Vatican is calling for more awareness of climate change's effect on the world's poor.
SHOW TRANSCRIPT

The pope is weighing in on climate change and, as expected, it's ruffling a few feathers.

Vatican officials are urging people to pay attention to climate change more and its effect on the world's poor.

Tuesday is the Protect the Earth, Dignify Humanity meeting in Rome and, as The Guardian writes, it's expected to serve as a preview for Pope Francis's environmental encyclical due out in June or July.

The Pontifical Academy of Sciences says Tuesday's goal "is a joint statement on the moral and religious imperative of dealing with climate change in the context of sustainable development, highlighting the intrinsic connection between respect for the environment and respect for people."

Climate change skeptics predictably aren't on board with the Vatican's mindset though. One of the most outspoken opponents is the conservative think tank Heartland Institute, which released a statement criticizing the pope. It reads, in part,: "If [Pope Francis] is truly committed to advancing science, the poor and creation, he should reject climate chaos claims unless and until alarmists can provide solid evidence to back up their assertions and models."

Regardless, The New York Times notes this is still a bit damaging to conservatives' current mindsets, especially with the pope's visit to the U.S. coming up in September where he's expected to speak before Congress. The outlet says that could be a "potent moment."

Pope Francis hasn't shied away from the issue of climate change in the past. In December, the pope told negotiators at a climate summit in Peru time is running out to find solutions, again pointing to the threat it posed to the poor — a major focus of his papacy. (Video via Vatican | CCTV)