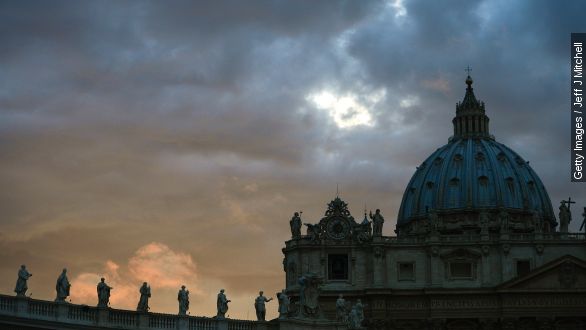 SMS
Vatican Accused Of Rejecting French Gay Ambassador
By Jake Godin
By Jake Godin
April 11, 2015
The Vatican's silence on approving an openly gay ambassador from France has some speculating the church may have rejected him because he's gay.
SHOW TRANSCRIPT

Did the Vatican reject a gay ambassador? (Video via Vatican)

In January, France nominated Laurent Stefanini as its ambassador to the Vatican. More than three months later, and there’s still no word from the Holy See on whether he’s been accepted — a diplomatic practice known as agrément.

The months of silence for a process that normally takes around a month has triggered speculation that the Vatican has quietly rejected Stefanini because he is gay. Some French media have outright claimed that’s the case.

French paper Le Journal du Dimanche quotes an anonymous Vatican source who says the rejection was “a decision taken by the pope himself.” (Video via Vatican)

The Vatican’s only official comment so far seems to be a statement to The Washington Post saying, “any host government has the right to grant agrément or refuse it for their own reasons.”

If the Holy See did indeed reject Stefanini on the basis of his sexual orientation, it would be a blow to the image of a Pope seen as more progressive than his predecessors. (Video via Vatican)

Especially given Pope Francis’ comments In 2013, when on a return flight from Brazil he said "If a person is gay and seeks God and has good will, who am I to judge?"

But speaking to The Local’s French outlet, a French Catholic blogger says there could be another reason for the apparent rejection of Stefanini. France announced his appointment before contacting the Vatican — a sort of diplomatic faux pas. (Video via Vatican)

The BBC’s Rome correspondent offered another possibility, saying the apparent rejection could have something to do with France’s decision to legalize same-sex marriage in 2013.

This wouldn’t be the first time the Vatican has rejected a French ambassador because of his or her opposition to specific church doctrine or even for being gay.

In 2008, the National Catholic Reporter noted there were rumors the Vatican had apparently rejected three of France’s proposed ambassadors — one for being divorced, one for being Protestant and the third for being gay.

This video includes images from Getty Images and Mike / CC BY NC SA 2.0.