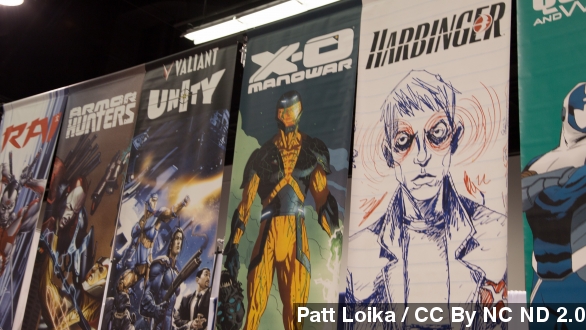 Getting tired of superheroes yet? Well, tough, because a whole new batch of movies is on the way.

It's not exactly a household name like Marvel, but Valiant has its own universe of superheroes, such as Bloodshot, X-O Manowar and even an Avengers-esque team.

Now, DMG and Valiant are partnering to put several of those characters on movie and TV screens sometime in the near future, and a big, blockbuster, superhero team-up movie is likely inevitable.

So we have Marvel, DC and now Valiant all making superhero movies, and it's hard not to feel the genre could be getting dangerously overcrowded.

Keep in mind this is already when domestic box office numbers are on a decline. Revenue dropped 5.2 percent in 2014 to $10.3 billion.

And one report from a Hollywood analyst warns that the overabundance of superhero films could be weighing the industry down saying, "History suggests ... that as the number of films in a given genre increases, the average per-film performance decreases, and that even the top-tier films in a genre are not immune to the phenomenon."

Look at "The Amazing Spider-Man 2" for instance. That film centers on one of the most popular superheroes ever and stars an A-list cast but only raked in $200 million domestically at the box office, $60 million less than the original film.

But getting into the superhero genre might not be such a bad move for DMG. Superhero movies are continuing to do remarkably well overseas. And China, DMG's home market, has seen strong growth at the box office.

And "Guardians of the Galaxy" has shown even a talking raccoon and a team of heroes few people have heard of can score big box office numbers. So, maybe Valiant's limited popularity won't hold it back too much.