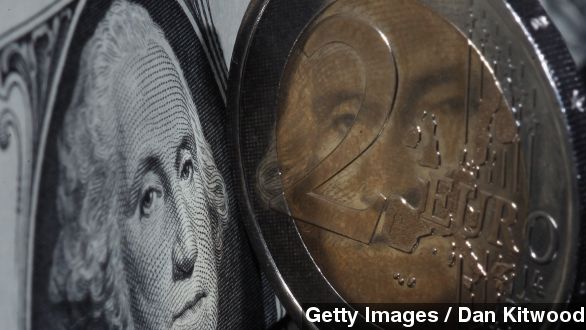 SMS
Vacationing U.S. Consumers Will Benefit From Stronger Dollar
By Jake Godin
By Jake Godin
March 11, 2015
The dollar is getting stronger and is even nearing parity with the euro. That's good news for Americans who want to vacation in Europe soon.
SHOW TRANSCRIPT

The dollar is up. And the euro is down.

Right, so riding on the success of the current U.S. economy, the dollar is strong. Strong enough, in fact, that it's almost reached parity with the euro, something that hasn't been seen in more than a decade. (Video via U.S. Department of the Treasury)

But what does that mean for the American consumer? Well, a lot actually.

International vacations, for example, are going to be much cheaper anywhere the dollar is making gains on the local currency.

That includes anywhere using the euro, which of course, happens to be most of Europe.

You won't see countries like Greece complaining, though. The more Americans spend in the country during vacations — where tourism accounts for close to a fifth of GDP — the better. (Video via Greek National Tourism Organization)

But a strong dollar doesn't only affect places outside of America. Consumers within the U.S. will eventually find cheaper prices as well. (Video via United States Mint)

Not everyone stands to benefit from a stronger U.S. dollar. A tougher dollar means the Federal Reserve may soon hike up interest rates to quell more inflation — and that has investors on edge.

The prospect of a rate hike from the Federal Reserve caused the Dow Jones Industrial Average to fall about 330 points Wednesday morning after Monday's high.

But as Bloomberg points out, a skittish Wall Street in front of a potential interest rate hike is somewhat ironic: "The more investors believe the central bank will soon raise rates the more the dollar appreciates, and in turn, the more inflation will fall short of the Fed's goal."

But back to the euro-dollar comparison. If you're considering a vacation, it's a pretty good time to cross the pond.