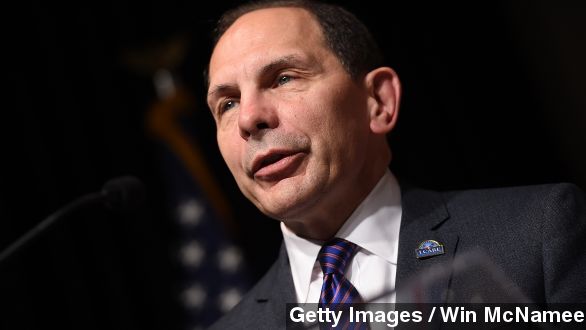 ROBERT MCDONALD VIA CNN: "This is going to be the largest reorganizing of Veterans Affairs since it's establishment. We are acting aggressively, expeditiously and consistent with the law."

McDonald and his department have come under intense scrutiny in the the past year.

His predecessor, Eric Shinseki, resigned in May amid revelations VA medical centers across the country had falsified records to cover up delays in treating patients. (Via The White House)

In August, President Obama signed legislation that shortened the process for removing the employees involved. (Via C-SPAN)

Three months later, only one senior VA official has been fired, according to Military Times.

McDonald's critics, including Arizona Senators John McCain and Jeff Flake, have condemned what they see as a "failure to change the culture at the VA" — asking why workers who were part of the coverup are still on the job.

McDonald has defended his approach. Firing people who work for the federal government, he says, is a lot more complicated than firing someone in the private sector.

MCDONALD VIA THE CHRISTIAN SCIENCE MONITOR: “The law didn’t grant any kind of new power that would suddenly give me the ability to walk into a room and simply fire people.”

As part of his reforms, the VA is introducing a program allowing veterans who can't get easy access to a VA medical center to receive private healthcare treatment.

McDonald also says he'd like to hire as many as 28,000 doctors and nurses to cut down on the backlog of patients.