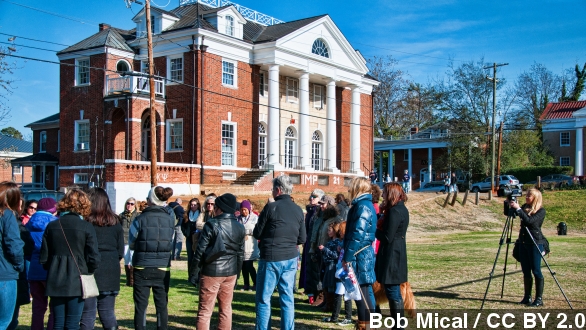 A police investigation has cleared Phi Kappa Psi of gang-rape accusations at its University of Virginia chapter.

This damning article in Rolling Stone prompted the investigation. The story featured a woman named Jackie who was allegedly gang raped at Phi Kappa Psi.

That piece set off student protests and nationwide scrutiny. The fraternity also voluntarily suspended itself in November after the report came out. (Video via The Cavalier Daily)

UVA's president requested the investigation, but the school now says it's reinstated the fraternity. You might remember — questions about that Rolling Stone article's sources made for a pretty embarrassing walk-back from the magazine.

The top of the article now reads: "There now appear to be discrepancies in Jackie's account. ... We were mistaken in honoring Jackie's request to not contact the alleged assaulters to get their account."

The university president had also put a ban on all social activities for Greek organizations. It was lifted in January but with the condition that all fraternities and sororities signed a fraternal organization agreement.

Phi Kappa Psi was reportedly the first to sign it.