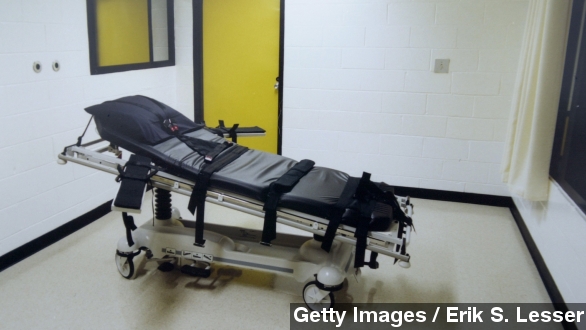 SMS
Utah Re-Adopts Firing Squad, Other States May Follow
By Jay Strubberg
By Jay Strubberg
March 23, 2015
As states try to cope with a shortage of lethal injection drugs, Utah became the first to officially bring back the firing squad.
SHOW TRANSCRIPT

The governor of Utah has signed a bill that will bring back the firing squad for executions in the event the state is unable to get its hands on lethal injection drugs.

A spokesperson for Gov. Gary Herbert said in statement, "When a jury makes the decision and a judge signs a death warrant, enforcing that lawful decision is the obligation of the executive branch," meaning they have to carry out the sentence one way or another.

The decision to bring back the once-abandoned method of execution comes as several states face shortages of lethal injection drugs and are searching for alternative ways to carry out executions. (Video via KSL-TV)

Wyoming's state House of Representatives approved a firing squad bill last month, and similar measures have been introduced in Missouri, Arkansas and elsewhere.

Texas is widely reported to be down to its last dose of lethal injection drugs, and officials have so far not said what they will do when the state runs out. (Video via KTRK)

All of the bills have similar language to Utah's, saying lethal injection is still the state's preferred method of execution, and that firing squads would only be used if lethal injection drugs weren't available.

The U.S. Supreme Court is expected to hear arguments concerning lethal injection and the use of alternative execution methods next month.

This video includes images from Tommy Woodard / CC BY 2.0 and Getty Images.