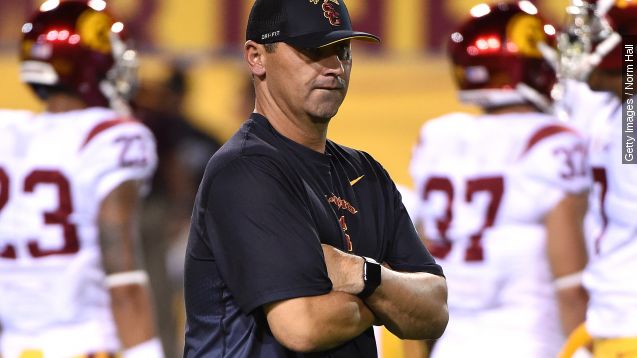 USC's head football coach is taking a leave of absence from the team, but he might not be the only one whose job is in jeopardy.

According to reports, head coach Steve Sarkisian arrived for practice Sunday visibly intoxicated, prompting concern from school athletic director Pat Haden, who asked Sarkisian to step away from the team. (Video via "The Dan Patrick Show")

Sunday's reported incident comes about three weeks after Sarkisian apologized for being intoxicated at a school-sponsored event for boosters. Reports also say he may have been drunk during USC's recent game against Arizona State. There are suggestions Sarkisian's potential alcohol abuse could stem from stress not just on the field but also in his personal life.

"This is a situation where Sarkisian is obviously under a lot of stress," ESPN analyst Joe Schad said. "But he was dealing with not only the football pressures, but also a personal family situation: Sarkisian is going through a divorce."

Sarkisian's indefinite leave from the team has many fans calling out Haden, who is tasked with managing the school's coaches.

Before Sarkisian, there was Lane Kiffin, who is now Alabama's offensive coordinator. Although Haden didn't step into the AD role until months after Kiffin was hired, Kiffin's high-profile flop didn't help Haden's image. (Video via AL.com)

"I know Pat Haden didn't hire Lane Kiffin, but when he kept him after that Sun Bowl, and kind of went out on a limb and really protected Lane, he might as well have hired Lane Kiffin the way he kept him around," Fox Sports analyst Petros Papadakis said.

In 2013, Haden fired Kiffin mid-season at an airport terminal as the team returned from another disappointing loss.

USC football was projected as a top-10 team at the start of the season but has underperformed, losing to Stanford in week two and getting upended by Washington at home Thursday. (Video via Los Angeles Times)

And it won't get any easier. The Trojans' next two matchups are on the road at Notre Dame and at home versus undefeated Utah. Offensive coordinator Clay Helton will take charge of the team for now.